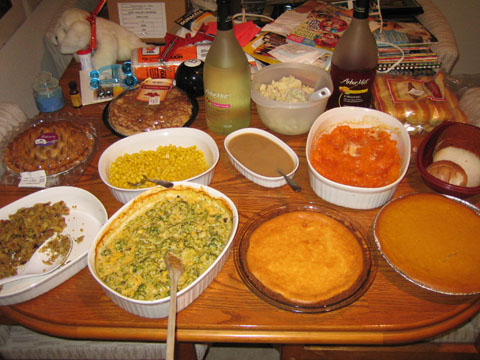 Dinner went off without a hitch, except for the fact that I started the sweet potatoes too late and burnt my fingers something fierce trying to scoop them out, but all in all it was great! It looks like a lot of food, but I’d say that the leftovers will be gone in another day or two, with the exception of the desserts, of course! So much cheesecake…

Things That I’m Thankful for in 2006:
1. an amazing girlfriend who’s more than I could’ve ever dreamed of (…goes without saying, though, doesn’t it?)
2. friends and family who are great, even though I don’t see them nearly often enough
3. a job that is finally starting to come around, to the point where I haven’t absolutely hated going in in quite a while
4. the ambition that Sara and others have been pushing to get me to start writing again
5. L7 Comix (shameless plug)

So far it’s been a great holiday weekend – only one more day to go. 🙁 Last night Sara and I went to Clearwater Beach to walk off some calories, then spent a bunch of money on uber-cheap DVDs at Wal-Mart during the last remaining minutes of Black Friday. Today we were going to go over to Disney, but got lazy instead – Sara’s playing Kingdom Hearts and I’m trying to write right now. We might still make it over to Mickey’s world tomorrow to see some of the decorations, but if not, we’ve still got all of December, too. Happy holidays!!!