So, I have another follow-up to The Great Corsair Rebate Debacle that I wrote about a few weeks ago. After my pissed off blog post, I went ahead and forwarded it to Corsair customer service and surprisingly got a couple of responses saying that they’d correct the error and send a second check right away. Well, ok – first they confusingly cited that the second rebate was invalid because the UPC hadn’t been included, which wasn’t actually the case, but ultimately I thought that the issue would finally be resolved when I got an e-mail from a manager on top of all that apologizing for the error and thanking me for my feedback.

That said, check out what I got in the mail today: 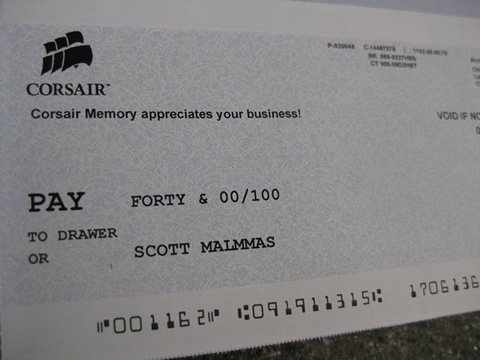 No, no – I didn’t pull a switchero and change my name to some weird, misspelling of Sara’s maiden name. Apparently Corsair’s method of “fixing” the problem somehow resulted in issuing a new rebate check to a person who doesn’t actually exist.

My final e-mail to Corsair:

To [names withheld out of courtesy],

In following up on the rebate issue that I contacted you about a few weeks ago, I wanted to let you know that I do appreciate your efforts in attempting to resolve this error. Nonetheless, I'm not sure what else to say at this point because while today I did receive the rebate check that was promised, there's not really much I can do with it except sigh.

The check I received today was made out to SCOTT MALMMAS (see attached). My name, as noted from our previous correspondence, is SCOTT SEVENER. My wife's maiden name is SARA MALAMAS, as this product was purchased before she had her legal name changed after we were married. That said, we could've worked with checks made out to SCOTT SEVENER, SARA MALAMAS, or even SARA SEVENER, however our bank is not going to let either of us cash a check that you sent to SCOTT MALMMAS because this person doesn't exist.

I think this reaffirms that your rebate department lacks a certain attention to detail that would've prevented this whole mishap from happening in the first place.

Just for the record, the new memory that I bought last week for my latest computer upgrade? Kingston.