Last weekend Sara and I took her parents to Epcot for the day after we picked them up from Port Canaveral – good times. I didn’t take nearly as many pictures as I normally do, but here’s one from IllumiNations that didn’t turn out too bad. My experience from shooting fireworks at the Magic Kingdom has been that about 1 out of 20 end up being any good, so clearly we just need to spend some more time at Epcot in the evenings… 🙂 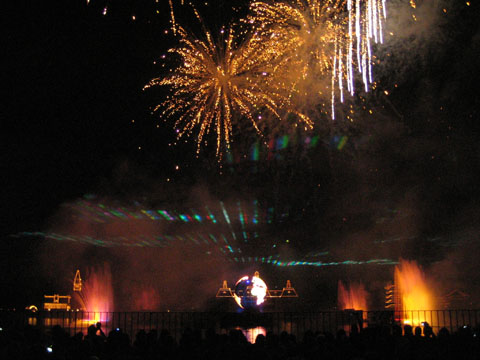 (This is the very first time I’ve watched the show from dead center in the front of the World Showcase – most of the time we get stuck somewhere with a limited view around the lagoon. Mind you, the people behind us who wanted to sit down got mad because everyone else was standing (Hey, we were sitting too, but we moved when it was clear that we wouldn’t be able to see anything!), but that’s life. For those others who frequent Disney World, where have you found to be the best viewing spots for this show???)