This was the first weekend of Sara actually getting weekends off from work, and despite the fact that we spent most of the time catching up on things that had gotten put off, running around for errands and doing chores and whatnot, it was ultimately good to just be able to spend some time together that isn’t 11:30pm after she gets home from work. It’s amazing how even something as mundane as grocery shopping can be better with the one you love.

But aside from housework, chores, and all sorts of other things that nobody really wants to hear about here, we did also make some significant progress with the wedding planning today that we’re both really excited about. Now mind you, things aren’t written in stone or signed with blood yet, but we’re pretty confident that we’ve finally found the location for the whole shindig! It’s a hotel called the Grand Plaza on St. Pete Beach – you may remember my writing about it a few months ago when it stood out on a random walk on the beach. Well, this evening we got the grand tour of the place by the Catering Manager and were pretty much blown away by what we saw. The hotel itself is right on the beach, which means no worrying about how to get guests across a busy Gulf Blvd. for the ceremony on the beach like the last place we were considering. The prices are considerably cheaper, and this is one of the only places we’ve found that actually discounts the food itself and not just the minimums on non-peak days (right now we’re shooting for a Thursday or Friday, with my vote actually towards Thursday). And the room itself, well, although the pictures below aren’t the best and they in no way do the view justice, they still give a pretty good idea of what we’re talking about – this room is ten stories up at the top of the hotel and offers a panoramic view of the Gulf of Mexico through floor-to-ceiling glass windows all around. 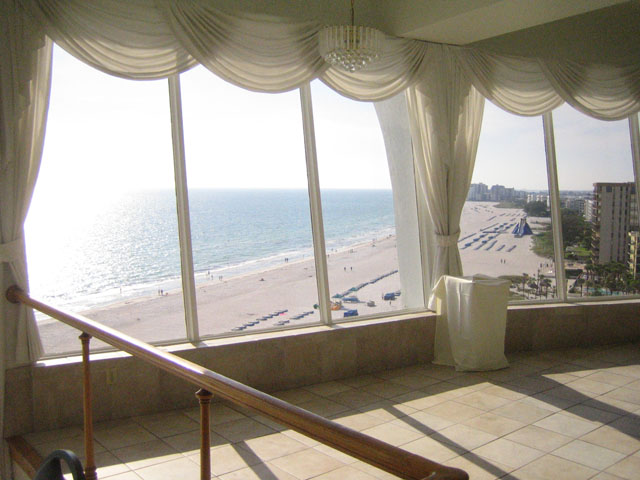 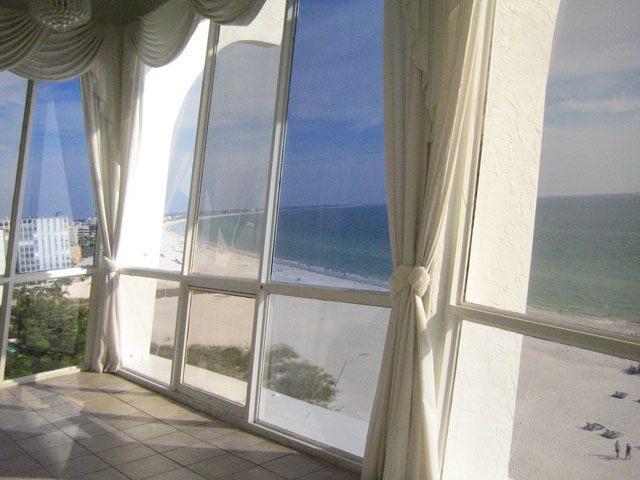 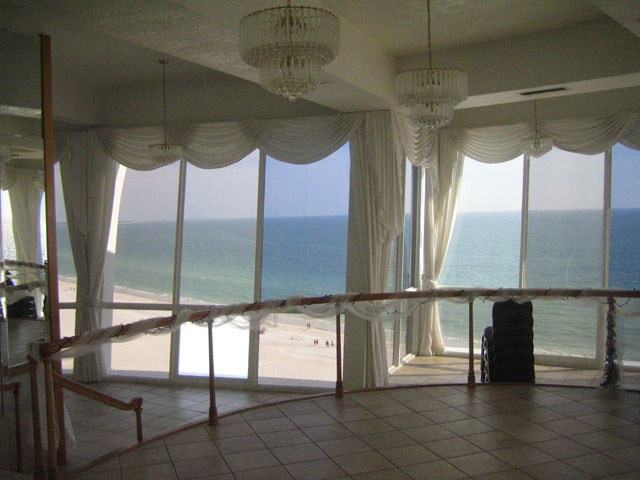 The only real caveat is that the room is a bit small – capacity is 100 people – so we’re finding ourselves having to change a few preferences, including switching the meal from a buffet over to a plated meal and being a little more selective on our guest list, but after going over things tonight when we got home, the guest list editing wasn’t nearly as bad as we were expecting and we’ll probably still be able to make some adjustments once we can get an idea of who is actually willing to travel for this. But it’s sooooo worth it for the view – we nearly agreed in the car that we’d cut the guest list down to 20 people if we had to to go with the view … it’s really just incredible and it’ll be another something to remember forever. All in all, it was a great addition to the day and I know I’m feeling a lot better about being able to pay for things next year just by watching the reception bills drop by several grand from one location to another! We’ve still got a long ways to go, but we’re getting there! 🙂