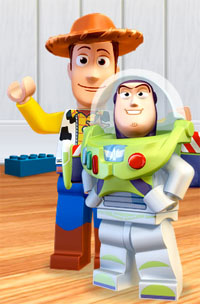 I’d heard rumors about LEGO possibly partnering with Disney for an upcoming series or two, but it the actual details were kept pretty tight-lipped. Well, the secret’s finally out because they’ve got a full-page teaser ad in the latest edition of their fan club magazine – Toy Story is going LEGO!

I think this will be a good change of pace for them because not for nothing, but they’ve kind of been beating that Star Wars license to death over the last couple of years. I mean, they’ve released at least three or four different versions of the Millennium Falcon by now, ranging everywhere from $5 – $300, which is cool and all, but it’s time to move on and I think Disney’s library opens up a whole new world of possibilities. (pun partially intended!)

You can see some of the actual demo pieces here on Flickr – apparently these were unveiled at some LEGO convention recently, and I think they look pretty cool. I did read a few complaints in the comments about non-standard pieces – you can see in some of the pictures that the legs are a little longer and obviously their heads aren’t the traditional LEGO shape, which does look a bit MegaBlok-ish, but ultimately who am I kidding?! We’ll have every set in this series regardless… 🙂

P.S. For actual photos, follow the Flickr link; the official LEGO page has a small amount of promotional artwork up, as well as a little Flash game that is kinda useless, but frankly I’m not sure why they put the website up yet if none of the actual links have content behind them. I’m just saying because I love both brands, guys – it looks like somebody missed the mark here!