Well, not exactly car shopping just yet, mind you, but more car looking at this time – that’s what we did for part of this afternoon, anyways. It seemed like a good idea, with Sara finally graduating nursing school and a new car as a well-earned reward in her not-so-distant future – the local auto show coming to town this weekend proved to be a great opportunity to preview her options without the hassle of getting swarmed by pushy salesmen.

And at this point, I think we’re leaning towards the new Honda Insight, a new hybrid in next year’s lineup that promises anywhere between 40 – 43 mpg. Sara liked it because it was a Honda and she’s had good experiences with them in the past, not to mention still having plenty of room and really having that new car feeling – it’s a pretty sleek looking car! I liked it because it’s a hybrid and I think the fuel efficiency is going to be really important in the next couple of years, and even though it’s still a bit pricey, I think it should still be in the running because of this. We’ll see… 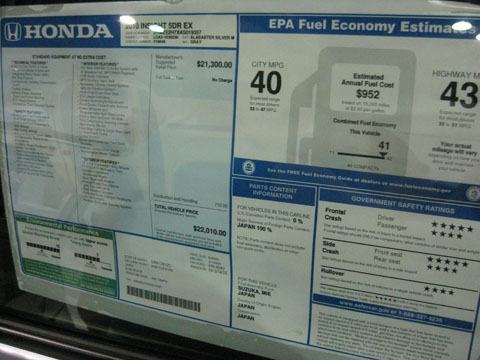 Of course, one of the other things that I couldn’t help but notice this afternoon was simply the lack of show by The Big Three automakers from Detroit. Here we looked at eight or ten different manufacturers and after it all, Honda and Toyota still managed to shine above our own domestic automakers who threw such a big stink last year about how they were too big to fail and needed taxpayer assistance to keep their businesses afloat. Millions of dollars worth of loans and yet they still had all of their SUVs and big trucks, their muscle cars, and exactly one hybrid model each to show their desire to keep their businesses afloat. My favorite, I think, was Ford’s new fuel efficient car, which apparently gets better city mileage than highway mileage … all for about $15k more than Honda’s hybrid, even though Honda’s still gets better mileage to boot!

So anyways, all in all I think it was a good way to spend a couple hours of the afternoon. It was nice to be able to look at all of the different options under one roof and in such a short amount of time, so now it’s just a matter of picking a favorite and then going to battle for the price. Good times…