When we were in Gaylord, Lori and James went on and on about how they were getting one, but I didn’t understand just how significant that really was. To be graced with such a dedication to flavor and quality is a blessing, and I can only hope to one day welcome them into the southern United States in a manner befitting of their awesomeness.

I’m talking, of course, about the magical breakfast experience that is Tim Hortons. 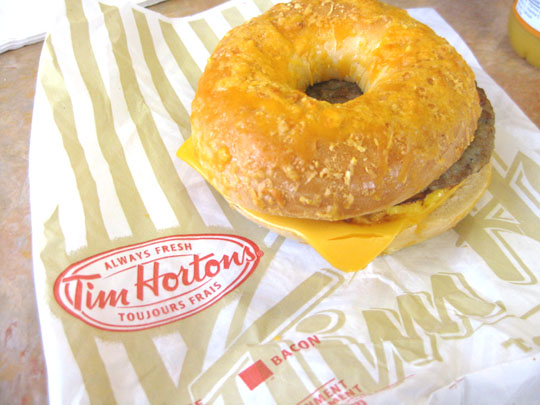 Sara and I first dined at this wonderful eatery the morning we were set to leave Sudbury and drive down to Toronto. We had spotted one across the street from our hotel the night before and thought that it was high time to finally see what all of the fuss was about, but boy let me tell you, never before has so much fuss ever been so completely and unequivocally right on the money than the boasting that had been suggested with regards to Tim Hortons. It certainly wasn’t planned this way, at least not by me, but in that lone meal on a calm, Sunday morning, all other counter-served breakfasts were single-handedly ruined for me.

I think we ended up stopping at Tim Hortons at least two or three more times before leaving Canada, even making it a point to grab breakfast there in Niagara one last time before heading back across the border to give us an opportunity to burn through whatever Canadian cash we still had left! Their Cheddar Cheese Bagels were divine, their breakfast sandwiches rendered Dunkin’s basically inedible, and oh yeah, their Ninja Turtle Gingerbread Cookies were pretty swell, too… 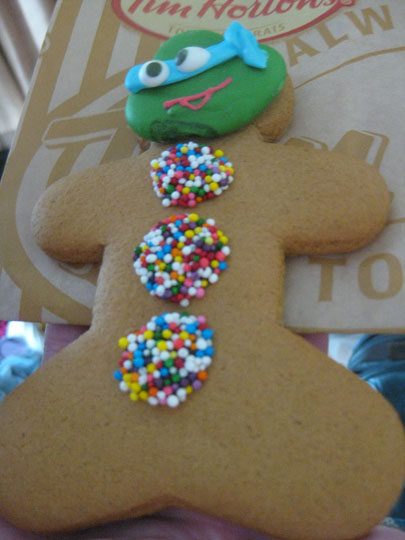 Seriously, what’s it gonna take to get a Tim Hortons down south that’s closer to me than, oh say, Kentucky?! Name your price, Canada! No matter how much multi-colored, monopoly-looking money you guys want, it’ll be worth it! I’ll start up a collect, go door to door if I have to … just name your price. 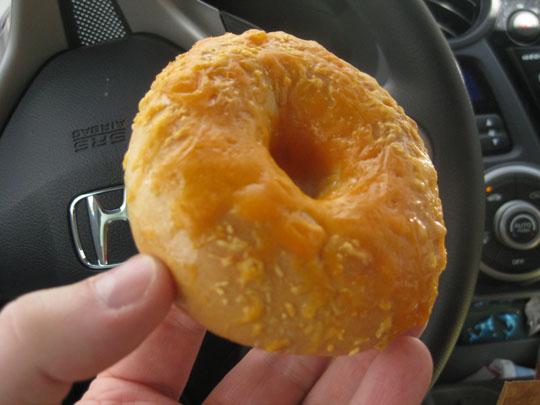 Just look at that bagel and tell me that it doesn’t make your mouth salivate. Look at it!

P.S. For one last Tim Tableau, check out this pimp pose that my book got with one of their more patriotic offerings during our final meal before crossing back over into the land of inferior donut shops!