So this week I had to create a new character for D&D, which was a bit of a challenge for me because unlike some other members of the group who tend to experiment and probably have half a dozen different heroes in their binders, personally I end up creating one and then running it as long as humanly possible until I simply have no choice but to start over again. And honestly, the only reason I even do that is simply because of the nature of our campaign – right now we’re not running a lot of high level modules to accommodate the newer players, so my two older characters simply can’t run in those level ranges anymore.

Anyways, the two characters that I have right now are a Level 6 Elven Ranger and a Level 4 Dragonborn Fighter. Both were created out of different motives – the ranger was my first with this group and was simply because I had never really played one back when I played in middle school because rangers were another guy’s schtick, and the fighter was born out of necessity because I was getting frustrated with not having a worthwhile defender to have my character’s back when I played my ranger.

Admittedly it was kinda tough choosing character #3 because it’s really important for me to also know the personality behind the character and not just focusing on stats to create the most effective character for a given role. Plus, it helps me in-game to play better because if I craft a persona for the character from the ground up, it just seems to flow better than building this awesome, super-high damage striker and then trying to fill in the backstory after the fact. This time, though, nothing was really jumping out at me, so I put together a list of the different classes and races that appealed to me: 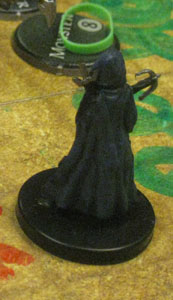 I ended up just throwing together the assassin basically at the last minute before I went to bed the night before game day because at that point I still had no idea, but I think I’m going to keep him around for a while because after actually playing him so far he was a lot of fun. I still have some tweaking to do once he levels because there were some options that I frankly just didn’t really understand until someone pointed them out Wednesday night, but I had two crits where he did about 40 damage each time at Level 1, so I was pretty happy with that! Plus, with a couple of adjustments I think I’m going to like his personality a lot, too – again, much like Shadow from FF3, in that he’s very quiet and reserved, but he’s also got the social skills to speak for himself when necessary, which actually proved to be quite useful because we had one character who almost got us in a fight with a local street gang far too early in the adventure that night! I don’t normally play characters with much for charisma, so that’ll be a new avenue for me…

(To the right you can see a horrible picture of Shadow’s tabletop debut, just moments before pouncing on his next victim. Needless to say, Monster #8‘s future did not look too bright…)