It’s amazing how attached one can get to a fictional character of their own creation.

In this case, I’m referring to the character I’ve been playing in a D&D home campaign for a couple of months now. Realistically, we’ve only played about half a dozen sessions because we only play once every other week – so that’s probably about 30 hours of game time – but I guess this is the first character that I’ve really gone all out with as far as developing not only a personality to play as, but also quite the elaborate backstory … and one that intertwines with those of the other players and even the current plotline itself, to boot! That’s one thing I’ve got to hand it to our DM – he’s been really great about using our backstories to help drive the story … as he likes to say, it’s not just his world, it’s all of ours.

That said, it was definitely a bit of a downer when Friday’s session culminated with my swordmage, Searil, not only going down for the count, but in fact pretty much getting obliterated out of existence! He died along with another character, two more were captured, and the final two just narrowly escaped from a combat that could’ve very easily been a TPK had one of the lead characters in the plot not sacrificed himself up to our combators in exchange for letting the others go. It was definitely an epic battle, but still disappointing in the end because now I’m faced with the daunting task of rolling up a new character and at this point I’m really torn at which direction to take…

One option would be to kind of cheat death and come back as a revenant, which would essentially give me the ability to re-use the same character with only a few tweaks for the new race. Part of me likes this idea just because I put so much into the character and was really enjoying his part in the story, but on the downside, this was totally the idea of another player in case his died and I’d kind of be afraid of stealing his idea if I carried through with it.

I also don’t want to feel like I’m choosing this option just because I don’t want to let the character go, which is definitely a possibility.

Option #2 would be to just wave goodbye to Searil and roll up a new character entirely. Again, this is a daunting task because I put so much into the last one I’m almost not quite ready to do that all over again. I guess I could always just kind of leave things open and develop the backstory as I go. If I go this route, I just know that I want to avoid fabricating some weak relation to my last character (this was his uncle’s cousin’s roommate’s ex-girlfriend…) because I think that would end up feeling like I’m just trying to wedge him into the story wherever I can. If I go this route, I definitely want to just wipe the slate clean and start completely fresh.

Of course, the worst thing is that I’ve basically only got a week to do this because after missing a week, we’re technically playing catch-up and running two weeks in a row, which unfortunately ends up being a lot of pressure because I’m worried that I’m not going to have time to give it what it needs and deserves. It still amazes me just how much deeper I got into this character in only a short few weeks than I ever have with any of my LFR characters – I know it’s just the nature of each kind of game, but I guess ultimately you don’t know what you’ve got ’til it’s gone… 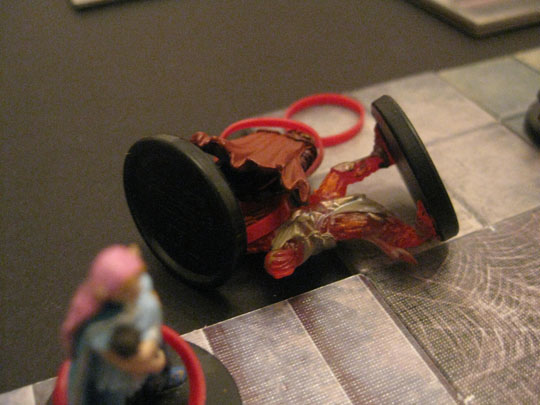 RIP – Searil Darksbane
“Please don’t come back as an evil death knight that wants retribution
against whatever character I come up with next to replace you…”
dungeons & dragons, geek stuff