So I was in Target looking at toys (among other things) earlier this evening when I exchanged a couple of text messages with my wife that I thought were kind of comforting:

Scott: Is it bad if it’s the toys that get me excited about having a kid more than anything else? 😉
Sara: Not at all

For the record, this was the picture that I had sent along with my text… 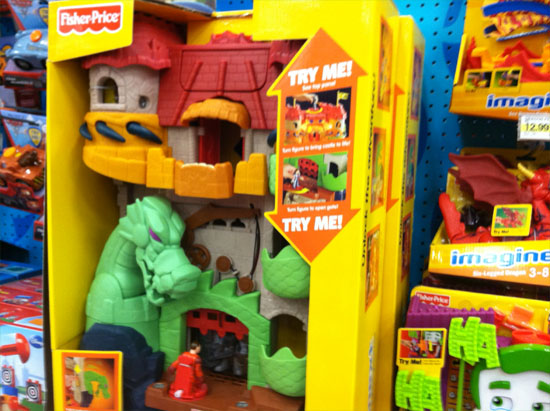 I mean – Fisher-Price mixed with Dungeons & Dragons … where was this stuff when I was a kid?!

Those not directly in the loop might be interested to know that while we’re not currently pregnant, we’ve been trying for a little while, which I don’t really want to talk about publicly here because it’s a bit too personal, but oddly enough I will talk about the decision simply to want to have kids because it certainly hasn’t been an easy one for me to swallow at times! I honestly go back and forth about it a lot – part of me is excited about all of the amazing experiences to look forward to, while another is scared out of his mind about being ready to take on that kind of challenge and the fear of possibly having to leave other things behind.

I do find that focusing on all of the positive, fun, exciting things does help to sway the balance, though, and so yeah, one of the things in particular that I’m looking forward to doing eventually with my son or daughter is getting just as much into their toys as they are. I’ve already got the LEGO collection started before they even get here, not to mention as seen above, there are just some really cool kids toys and video games and doodads and whatnots available out there these days! A lot of kids grow up playing with other kids, but not so much with their parents … you can tell them in the store simply by the ones who are enjoying the toy aisles with their kids* vs. the ones who are griping just to pry the kids away from them.

I want to be a fun Dad who plays with his kids, and who always makes time to play with his kids, and who encourages them to goof off and be creative and have fun as opposed to stiffeling it or telling them to “Calm down!” all the time. When we finally buy our own house, we are gonna have the mother of all playrooms in that thing, just filled to the brim with every toy and building brick and age-appropriate video game their (or my) hearts could desire! I’ve got such great nostalgia for all of the LEGOs and GoBots and Voltron lions and all of the other amazing toys that I enjoyed myself growing up that I really look forward to sharing all of those awesome memories with the next generation, and maybe even trying to figure out some of these new-fangled toys if we’ve still got any time left, too…

* Note: It’s kind of funny because I actually witnessed a positive version of this firsthand on this same trip, which did stand out to me because unfortunately I normally only ever hear the opposite. A little kid was picking out toys in the LEGO aisle and his Mom was actually pointing out that he still had money leftover if he wanted to get something else, or that he could even pick a set that was a little bigger! In fact, she was even helping to teach him how to look up the prices with one of those self-scan machines they have at random around the store, which was cute because I was actually blocking the machine sending this vitally important tweet and I overheard her say, “We can go check the price over here, but we have to wait our turn first…”

Maybe it seems silly to notice something as simple as a Mom actually enjoying time with her son, but it does seem like far too often that I overhear parents making their kids sound more like a burden than a blessing, and I’m sure it is tough at times … but toys of all things won’t be one of those struggling points for me, mark my words!

I’m also going to try really hard not to yell at them while we’re at Disney World – you know, the Most Magical Place on Earth, too, but that’s a rant for another day… 😉