In continuing the LEGO space discussion from a couple of weeks ago, how insanely cool is it that NASA is sending minifigs to Jupiter to help teach kids about science?! 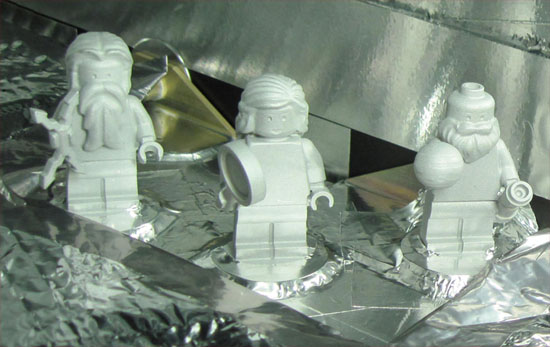 Unfortunately I couldn’t find anything more on the design specifics, but I did think it was kind of interesting that the three figures were custom made out of aluminum for the journey – probably not for weight because I’d think that the metal would actually weigh more than plastic, but more so my guess would be some sort of heat issue, considering that the 1,740 million mile trip to Jupiter over five years would clock the probe’s speed in at just under 40,000 mph!!!

Kind of reminds me of Disney’s coordination with NASA a couple of years ago to send a Buzz Lightyear figurine to the International Space Station, where he conducted a series of “missions” that were available online to teach kids about space. I would’ve been all over this kind of stuff if it was going on when I was a kid, so I’ll be real curious to see what sorts of games and videos LEGO and NASA put together to help promote it.