So I guess I haven’t really mentioned the whole ordeal here yet, and I was somewhat reluctant to do so until everything was said and done for fear of jinxing it, but we officially signed our new lease over the weekend, gave our notice here, and now the house is a mess as it’s starting to get filled up with boxes … I guess the cat’s out of the bag now!

Awesome Pool House
Our biggest selling point and probably the main inspiration for us choosing this particular house, it’s got an awesome pool (with jacuzzi!) that we’re really looking forward to!!! Technically we made the decision to look because we feel like we need more space for some upcoming changes, and honestly until we found the listing we didn’t think that we’d ever find one even in our price range, but we really lucked out on this one. Looking forward to sharing some pics when we finally move in!

Luck of the Draw
I’ve got to say, it really is almost pure luck that we got this place. The listing went up late on a Wednesday night and I just happened to catch it Thursday morning on a whim. I almost didn’t bother even looking because the whole process had gotten really frustrating at that point, from the Nigerian scammers to rentals that were also still up for sale to old listings that just never got taken down – it had all gotten really draining and I can only imagine how much worse actually buying a house can be! Anyways, the pictures for this house were slim, but the photos of the pool sold it, so knowing how competitively it was priced, I knew that we had to act fast if we wanted a shot. We setup a viewing later that weekend, did some rental history homework to make the decision for the landlord a little easier, and literally called on the way home after the viewing to confirm our interest because there were other people viewing the place at the same time!

All of that took place the weekend before last, we spent last week going through background checks and working on the lease, and as of Sunday it had been signed by both parties and we were officially moving out. And then the chaos began…

The Dustier Side of Moving
As I write this, we have 21 days left in this house and we take possession of the new house in 16 days. Yeah … we have a little over two weeks to pack up our entire lives and be ready to move! Actually, it’s still a lot, but I honestly feel like we’re doing better than we did last time because before we pretty much left the bulk of our packing until the day we actually had the moving truck parked outside. This time we’re trying to get it all done in advance, and we’re even making efforts to throw out/donate a lot of junk that we no longer need, too – earlier I carried 8 bags of crap out to the curb for garbage, and my bet is that we’ll double or triple that by the time that we’re finally done!

By the end of the weekend we’re hoping to have a lot of the packing and most of the painting done, so there’s a lot of work ahead of us, but we’re trying to focus on that bubbling hot tub at the end of the rainbow! 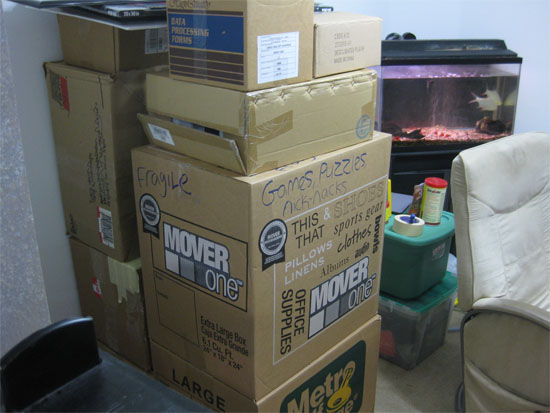 This is merely the beginning of Mount St. Boxmore… 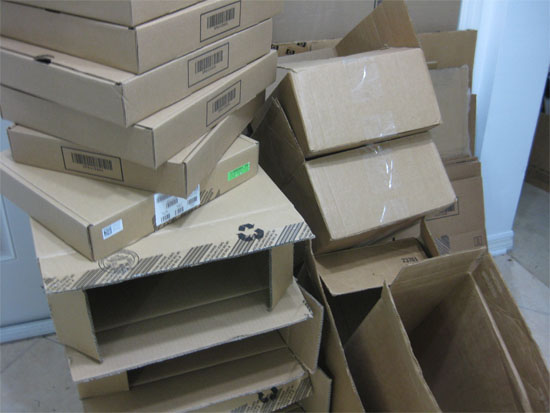 Those that were empty shall soon become full… 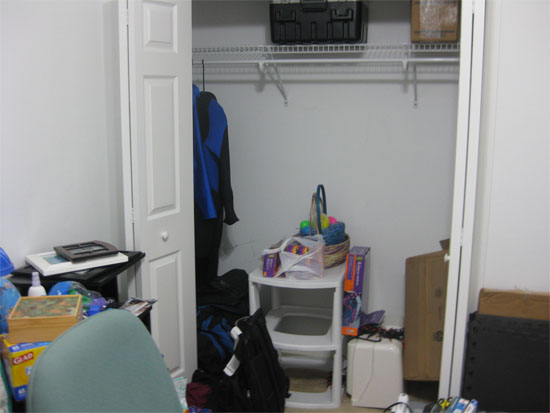 The first time we’ve seen the back wall of this closet in, oh, about three and a half years!

More photo fun to come as the move progresses, so stay tuned!