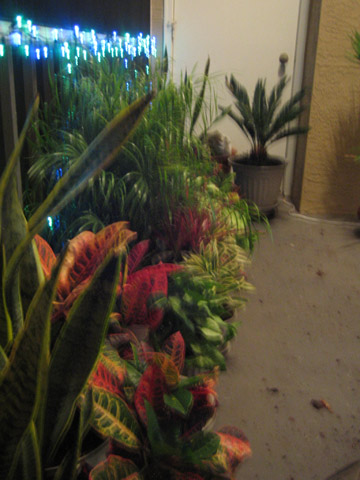 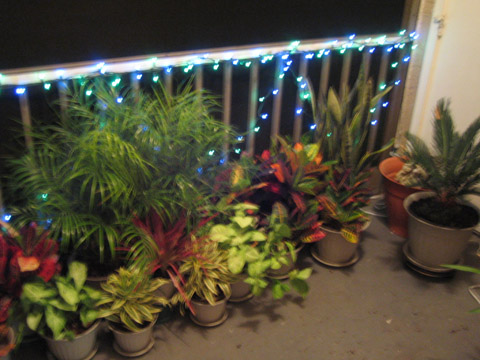 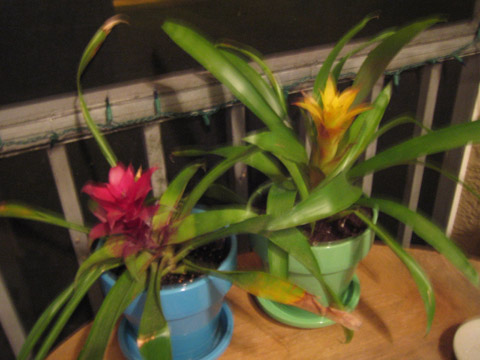 I still have a little work to do, but much improvement since I last played in the dirt! The plan is to put a couple of taller palms over by the closet (white) door, thus rendering it pretty much inaccessible, but nonetheless very tropical-looking all the same. A couple of hanging plants will help fill out the room (it’s got vaulted ceilings, so you can’t tell, but it’s still very big!), and the table which my flowers are currently resting on will hopefully be replaced with the sweet set that I found at Lowe’s…if the tax man isn’t too mean to me. (note: currently the pots are just on the table, but obviously if I could figure out a way to mount a nice flower box or posts to rest them on or something, that would be preferred…any ideas?)

I’m trying to hold off on shots that will show the entire room until it’s all done, but I’ll see if I can get a couple to include the cool tiki Christmas lights that I found tomorrow or the next night if I remember. Also, I know that this one is a long shot, but I’d love to figure out a way to have a small fountain / pond that I could keep a couple of goldfish in if it’s possible! I’m thinking of looking for a hard-shell liner that might fit around one of the larger pots that I have – with the palms overhead, I think that would be pretty awesome and would definitely add to the atmosphere! I could probably mount it on wheels or something – just like the palms and current plant there will be – to make getting to the storage closet just a little easier, but I can’t see it needing more than 15 or 20 gallons of water, anyways.