So as it were, it seems that progress in some areas results in unfortunate setbacks in others – in this case, whereas I may feel like I’m finally getting that creative horse of mine back up to speed, in turn my weight loss efforts are rapidly falling to the wayside. And don’t get me wrong – I’ve been doing pretty lousy all summer, but I guess maybe I just thought that with improvements in the creative zone, I’d also be able to utilize some of that motivation to build on other areas as well. Instead, however, I find myself just eating more and more junk food with creativity as an excuse.

Case in point: this is a pretty accurate summary of my dietary intake over the last three days… 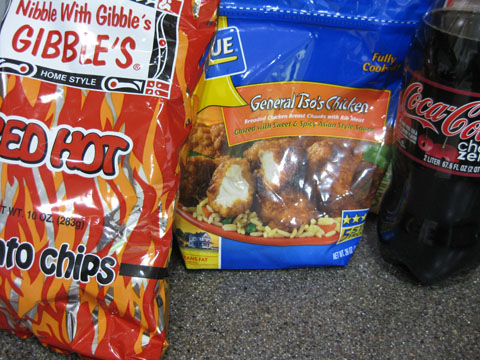 Basically I think I’ve somehow managed to convince myself that in order to be creative, I need to stop stressing out about pretty much everything else around me – i.e. work, personal stuff, and also my diet. So unfortunately instead of thinking, “Hey, I’ll stop by the gym for half an hour to unwind on the way home, then sit down and write something!” now it’s more like, “Hey, I’ll stop by Papa Johns and grab a pizza on the way home so I have something delicious to munch on while I write!”

My best self-analysis is that it’s a two-pronged issue – one being that it’s been so long that I’ve forgotten that feel-good feeling that you get after putting in a good workout, namely because that normally takes a week or two of consistent ass-kicking before it shows its head; and the second being that I’ve convinced myself that I create better when I eat garbage, which has proven to be true as of late, even if they’re not actually related. Not to mention that I enjoy eating pizza whereas time spent on the elliptical isn’t as great – finding that motivation to swap the two around isn’t exactly so easy.

But I think that’s my biggest concern because with these new strides in the land of the creatively productive, it almost seems like a toss up between being healthy and being creative, and thus I figure one out of two ain’t bad after several months of none out of two. Of course, there’s always that underlying fear of dying that seems to raise its ugly head when birthdays come around, not to mention the upcoming cruise where I was hoping to not be mistaken for the majestic killer whales swimming around us! I keep telling myself as soon as I wrap up a major project, I’m going to try to balance the scales a bit better … and then said project drags out another week, and another, and now I’m ramping up something completely new and different before the prior is officially done!

I guess it’s probably like how I think I remember it from January – March, in that I need to make exercise the #1 priority and fit the other stuff in behind so that I’m not later forced to make the decision the hard way. I know I can do the exercise part … I managed three days at the gym last week, which is a start … but I still know that the diet needs to get in check also if I want to see the pounds go away. It’s all about motivation, and drive, and possibly some further suggestions from a licensed physician if the first two still don’t make it happen. Really, which do I hate worse – not being creative or being overweight???