More Driving…
Slowly and somewhat reluctantly inching closer to home, the next couple of days of our journey were primarily driving days – still not much more than six hours for either day, and frankly, the next large-scale trip that we do that even remotely resembles this one, that’s precisely how we’re going to do it! Sure, we probably could’ve just drove non-stop and did the next leg from DC to Jacksonville in one day, but man, that would’ve been one hell of a long day… 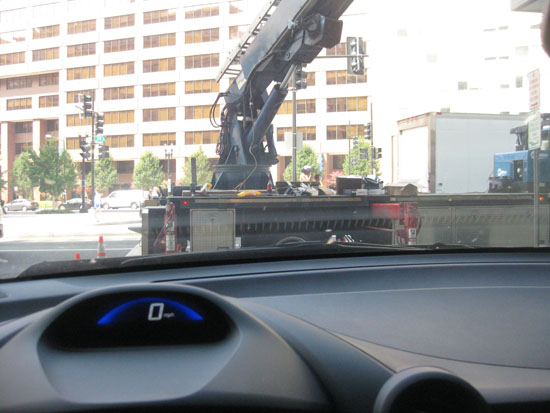 leaving DC, once we figured out how to get around this huge truck blocking the driveway!
First Stop – Fayetteville, NC
So the main selection criteria for this particular stop was – a) right off the freeway, halfway to Jacksonville; and b) the hotel can’t look like a dump. I mean, sure, we weren’t looking to blow the bank as the trip came to a close, but we’d managed to avoid general hotel creepiness for the past three weeks – no sense in compromising now! As you can see, the room was pretty plain and ordinary, and didn’t exactly offer us floor to ceiling views of anything, but it was a place to sleep that didn’t smell like mold, and really, that was good enough for us.

Then again, they did have complimentary cookies left out for us in the lobby! 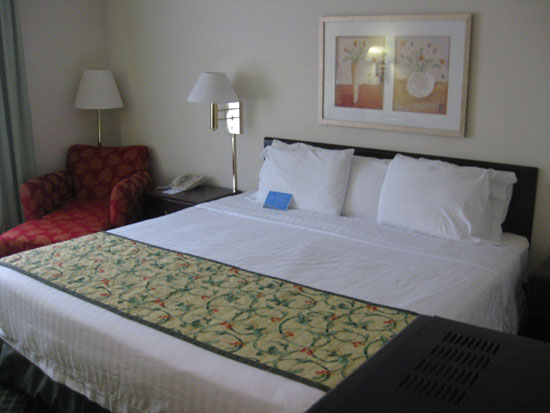 plain, but sufficient
An Evening of Mallness
Having gotten in just before the dinner rush, we decided to just keep it low-key that evening. I think I did have some writing to do anyways, so we just took a quick trip out to the local mall and Walmart to pickup a few things, and then returned back to the hotel where Sara went to bed early and I was up toiling with words into the wee hours of the night… 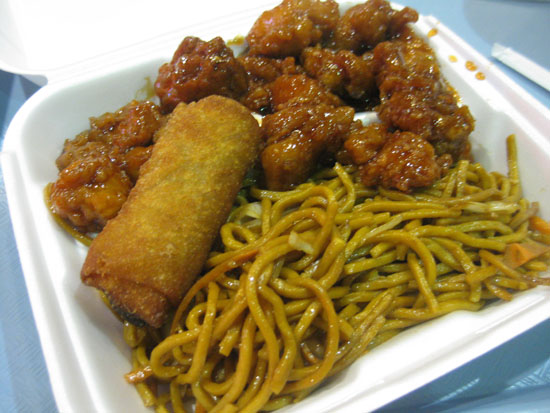 sometimes after a long day of driving, it’s just a simple dinner of cheap Chinese food that really hits the spot
Look Both Ways – a Cautionary Tale
Probably the most interesting happening from our stay in Fayetteville occurred when we were coming back from the mall to our hotel. About a mile or two away, we slowed down to let a forensics truck with its lights flashing pass … as it turns out, he was actually responding to something that had happened directly in front of our hotel. When we got there, using an alternate driveway to get into the parking lot, there were a few on-lookers, but it was really hard to tell what was going on. They had a good portion of the road shutdown, but there weren’t any broken vehicles in sight…

Heading inside, I just asked at random passing by the front desk what had happened, expecting an “I don’t know.” The response that the young girl gave back, however, was anything but that – apparently somebody had gotten hit by a car trying to walk across the street, and she knew this not because she saw it, but because she had checked for the guy’s pulse to see if he had still been alive!!! I guess she ran out to see what had happened and none of the on-lookers would step in because he was pretty well mangled, so she actually reached down to check before going back to call 9-1-1. By now all sorts of flashy lights were on scene and the place was pretty hectic, but I sure as hell couldn’t imagine being the first one around to have to respond to something like that! I would hope that instincts would just kick in and take over, like it sounded like this lady’s did, even though she seemed a bit shaken up by it now, but you know, after the adrenaline wears off from touching a dead person, I’m pretty sure that you’re allowed that.