Wrapping Things Up with a Familiar Face
Who would expect anything less from us, really?!

Our original descent back into the south had actually included us stopping off in South Carolina for a couple of days at the DVC resort there on Hilton Head Island, but it ended up being basically impossible to get reservations for pretty much any length of time during our trip. I even held out during the trip itself and kept checking in hopes that something would open up, but nada. Nonetheless, we had slowly used up the extra time that we were going to spend there in other places anyways, so in the end we just decided for a layover in Orlando on our way back across the state instead.

Beach Club is Awesome
I especially wanted to go back to the Beach Club – it’s where we spent our honeymoon back two falls ago, and I think I’m just really starting to love that resort. The location on the Boardwalk next to Epcot is great, the pool is without argument the best on property aside from the actual water parks, and just the whole ambience around the resort is really relaxed and laid back. Sara and I have talked about buying into a DVC membership ourselves eventually on down the road and at this point, I think the Beach Club would be one of my own top contenders for our home resort.

VIP Check-In
So we arrived probably right around 3pm, which admittedly is a little early – I think regular checkin usually begins at 4pm – and the moment I walked into the lobby, I saw a ton of people waiting in line at the checkin desk already. Not for nothing, but after being on the road for 3 weeks, we really didn’t feel like waiting around to kill time – our plan for that day didn’t really involve any time in the parks, per se, but more so just relaxing around the resort, dinner, and maybe some fireworks. I had a bad feeling that things might not go my way, right up until it was my turn at the desk…

The guy who helped me ended up being super nice and told me that while things were a little short, he would do whatever it took to get me in a room so that we wouldn’t have to wait around for housekeeping to finish up. This alone didn’t surprise me, as I had heard the same line two or three times being told to other guests ahead of me, but who knows what could’ve came available in the last five or ten minutes? Well, as it turned out he ended up coming back two or three times to tell me that he was still working on it until finally he came back with my room portfolio in hand … and a surprise. I tried my best not to beam too much as he explained that we were being upgraded to Club Level, in a room that actually happened to be right down the hall from where we had stayed on our honeymoon!

I’ll admit that I felt a little guilty about it because next to me was a huge family of five or six who clearly needed their room so the kids could take a rest, but … well … we do spend a lot of money over there, so I suppose my guilt didn’t really last all that long… 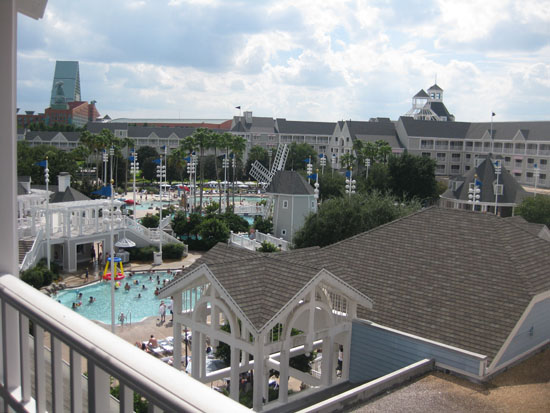