It’s with a heavy heart that I’m here to report that I have a rather large vacancy in my fish tank now.

It wasn’t even from the same issues that my plecosthamus had been facing before – that had basically all cleared up months ago, but earlier this week I started noticing him “sleeping upside down” in the tank, although he was still technically breathing, so I kind of had a feeling that his days were finally numbered. I’ve had that fish for a long time, plus he was getting freaking huge despite the tank not growing proportionally, so in a way I’m kind of surprised to see that he lasted as long as he did!

He was still really gross to get out of the tank, though – filled up an entire gallon ziplock bag from corner-to-corner diagonally – and was so big that I was actually worried about him breaking the bag even post-mortem…

Anyways, now I’m faced with a new situation with this tank that I probably haven’t faced in 4-5 years – I need to choose some new fish to put in it again. Right now there are only two lone tetras swimming about, no doubt still a bit traumatized from me not getting the big, dead guy out of there quick enough, and I think I’d like to stick more to fish that size than the giants that I’m used to having in the past. Nothing fancy – maybe a school of two or three more of them, plus something else that’s kind of unique and stands out.

Also, I think I want to try a different kind of algae eater this time for keeping the tank clean, even though we tried something else with Sara’s tank somewhat recently and it didn’t last too long. I mean, plecos are ok when they’re small, but this guy has just been a monster the last couple of years, to the point where it was almost intimidating to try and move him when we moved earlier this spring! So something that isn’t capable of displacing half the water in the tank when he’s mad, I guess, is more along the lines of what I’m looking for… 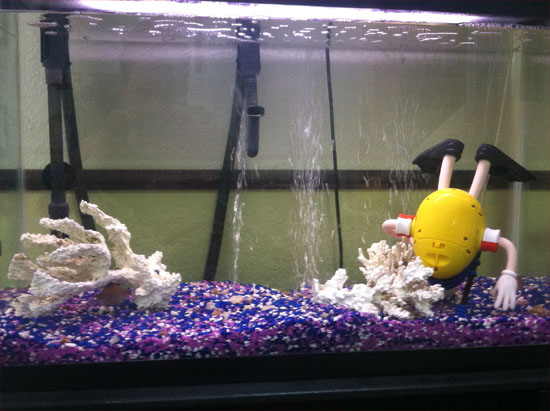 I’ll probably also change out those sharp, white pieces of plastic coral – they’ve always been a pain, but the big guy would just knock whatever I put in there around anyways, so it wasn’t really worth bothering with anything cool before. Maybe some of those joke, novelty pieces like a shark or a scuba diver in a beach chair – I’ve already got the snorkeling M&M guy!