So how exciting was your labor day???

Gourmet S’Mores?
We ended up grilling out hotdogs and hamburgers for dinner, and so at that point it was pretty much obligatory that we do s’mores for dessert … or at least that I have a s’more for dessert, anyways! Somewhat amused at all of the different flavors of marshmallows when we were at the store, I thought I’d try my hand at changing things up a bit and exploring new s’mores flavor options. Who knows – maybe I might come up with the next amazing recipe, right?!

Well, not this time, anyways. I opted for these new cinnamon bun marshmallows, along with a combination of classic chocolate and cookies ‘n cream white chocolate Hershey’s bars, and the result was edible, but not spectacular. In retrospect, I should’ve put a little more thought into the flavor combination instead of just thinking that each individually sounded intriguing, but rest assured, this experiment will continue until I find the perfect s’more recipe…

Lego Minifigs – Series 5!
Even though both Target and Walmart have been consistently failing me with having these things around lately, I still have to stop by the toy section just in case they happen to have a few laying around somewhere, and this time they did! Who knows how long they’ll actually keep them in stock – these seem like such an obvious seller to me, but stores can be kind of stupid sometimes in determining what they sell – but in the meantime, I’m happy to be able to pick up a few at a time as long as they’ve got them around… 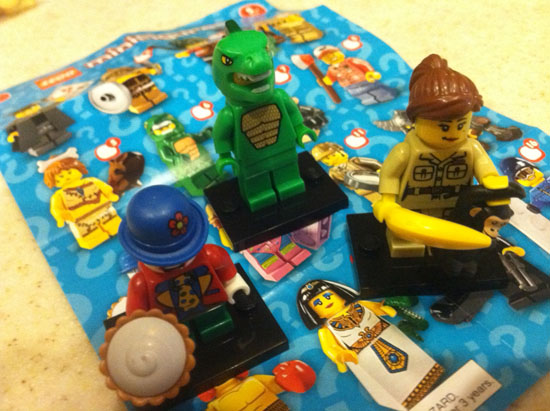 Plus, I got the Godzilla guy, who was probably my most coveted fig out of the whole series!

P.S. Here’s a cool online catalog that I just discovered that not only lists every figure from this series, but also from the other four runs that they’ve already done. It looks like I’ve got some serious catching up to do…

Mailbox Repair for Dummies
And lastly, I have no idea what actually happened, but this weekend I had to spend some time fixing our mailbox. I don’t know if our mailman just has a temper or something, but I came home one day to find that it was no longer attached to the post … it was still technically there, but the screws holding the board down to the post I guess broke or something so basically it was possible to pick the actual mailbox up simply by opening the door.

It ended up being a simple fix, although admittedly I did have to go buy screws to reattach it because I didn’t have any long enough around the house. Not really sure why I’m even bringing this up now, except maybe because it’s not really something that happens every day – especially to me, and besides, these good, old summary posts always look better when there are at least three topics anyways and for this particular labor day, these are all that I’ve got!