A few weeks ago I wrote a little about not having self control with regards to eating certain kinds of junk food and ended the post by pondering the question, “Is it worth giving up potato chips for an entire year to lose 50 pounds???”

I’ve had some time to think about it since then and ultimately in the grand scheme of things, yes, I think it might very well be worth it!

And believe you me, this certainly wasn’t the kind of decision that I was able to come to lightly – I love me some Sweet Chili Doritos or Kibbles BBQ or Ultra Crazy Super Hot chips like I love pizza, but the difference is, I can mow down a lot more potato chips in a single sitting than I can pizza any day, and frankly, the calorie counts aren’t even comparable when you start getting up to those insane quantities. “Betcha can’t eat just one…” is the story of my overweight life…

The thing is, sure it’s a little weird to think about meals without chips – particularly lunch, alongside a nice sandwich, or even to pair with a cheese pizza to help push me through a particularly stressful writing night, but no matter how tasty and delicious these fried, little wonders may be, one thought keeps ringing in my head – I’m never going to lose the weight I want to lose if I don’t learn to cut back!!!

I know that it’s going to take sacrifices, so maybe this is just another one that I have to suck up for the greater, skinnier good. Three months ago I also would’ve told you that there was no way I’d ever stop drinking soda, probably with a Cherry Coke Zero can in my hand while I said it, and yet today I really only drink the stuff if I need something to mix with my rum for the occasional alcoholic beverage! I know that it’s going to be painful, but I think this is my next step towards getting down to the weight that I want to be.

So here’s my plan – no more potato chips in the house, whether it be normal-sized bags or even the smaller snack packs … in the end they’re just too tempting, so they’ve gotta go. The only potato chips that I’ll allow in my life for the next 30 days will be the single-serving bags bought at the deli with my lunch (a la Subway), and honestly, that’s mostly just because they don’t really have any other side items available. For homemade lunches, it’s time to find something else to eat with my sandwiches and whatnot … exactly what that might be thus far, I have no idea!

I’ll write again about my progress in about a month and we’ll see after looking at the raw numbers if it’s worthwhile to consider pursuing for the rest of the year as well. I’m sure it probably will be – it’s really only common sense that as long as I replace the bad stuff with more of the good stuff, my calorie intake should go down, but we’ll see.

I’m going to miss you dearly, Doritos, but this is for my own good… 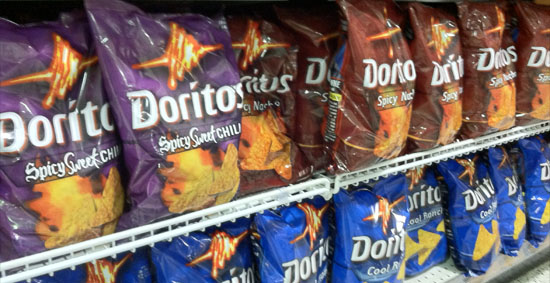