I don’t DM a lot of LFR games – yesterday was maybe my third or fourth that I’ve ever done total, and I really only started this year, but I have spent some time trying to come up with ways of making the games that I run unique and more enjoyable for everyone involved. I’ve toyed with the idea of incorporating LEGOs, but there are a bunch of logistical issues relating to relative sizes of minis, what to use for maps, and of course, actually coming up with what to use because you’d pretty much be limited to a couple of trolls, horses, maybe a dragon, and people, and honestly, the regular D&D minis just offer a lot more range than that.

All of those other elements aside, however, I was shown a tool yesterday that’s kind of neat for making maps that I think could have a lot of potential if I’m willing to invest some time in it. It’s called BattleMAP’R and it’s basically a tile-based web-app that allows you to construct a relatively large tiled map (8×10 squares, 3×3 pages – or 24×30 / 9 pages total) that you can then save or print via PDFs. It’s very easy to use – I literally created and printed off maps for the entire mod that I was running in about 20 minutes … an hour before leaving to go run the mod! 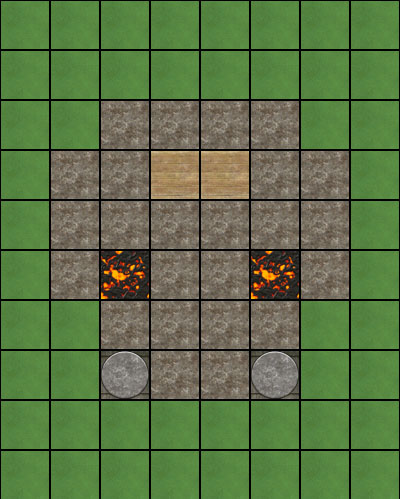 And although the initial tile set that is available is somewhat limited, the real potential here is in the ability to create and upload your own tiles because at that point you could use it to map out just about anything, given you’re able to craft simple 300x300px tiles … which wouldn’t be that hard to create with an afternoon and some basic guidelines in Photoshop. I was kind of disappointed to see that somebody else hadn’t already done this – you have the ability to share out your custom tiles with other users, but there are only a handful available. Still, could be very cool, and if in the long run it makes creating maps for the games that I do volunteer to run that much easier, then it’s probably time well spent!